History and Past Champions 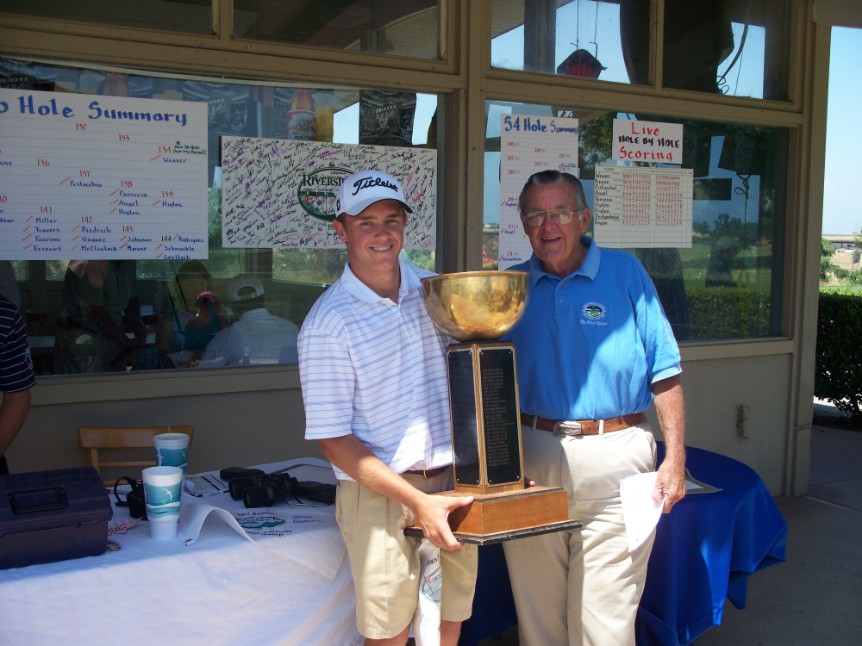 It was the host course for the first tournaments, Fort Washington C.C. and Riverside G.C. were built in 1923, and since was only a nine whole course Ft. Washington C.C. split the hosting of the tournament with Sunnyside for the first few years of the tourney.  Riverside G.C. was a privately owned 9-hole course opened to the public.  The ownership tried to keep it opened but finally was forced to close it in 1938.  The City of purchased it and with the help of the W.P.A. had Billy Bell, the arch.  of Sunnyside, expand the course to 18 holes and reopened it as an 18 hole course, Fresno Municipal G.C., in 1939.  The city and the sponsor, The Fresno Bee, moved the tournament to Fresno Muni in 1939 and it has been the host course since then.  The golf course adopted the original course name, Riverside G.C., in 1947.  The tournament changed its name from The Fresno City Men’s Amateur Golf tournament to The Fresno City Amateur Golf Tournament a few years back when they included the Ladies, Senior has and Master’s flights.

In 1928, the City of  fell in with the golf craze and with the help of the local newspaper, the membership or Sunnyside C.C. and the Fresno City Recreation Department held the first Fresno City Men's Amateur Golf Tournament.  The tournament was jointly sponsored by The Fresno City recreation Department and The Fresno Bee, from 1928 until 1971 when The Bee's parent company Mc Clatchy Publishing withdrew all sponsorship to all local events statewide.  At that time Howard Holeman, the Director of The Fresno City Recreation Dept. asked Ray Bouty to help keep the tourney running.  Ray enlisted the help of Dick Meffley and Bill Finn to keep it running and these three were the committee that ran the tournament from 1972 until Ray Bouty retired as pro at late in 1989.  Dick Meffley left at that time and Bill Finn stayed on and has worked with the Course Co local pro shop staff to keep the tournament running smoothly since 1990.  The players have sponsored the tournament since 1972 with all proceeds outside of expenses going back to the competitors.

There has never been a break; the tournament has been contested each year since the first tournament in 1928, making it one of the oldest continuous sporting events in the area.  The 2009 event will be the 82nd running of the championship without a break.

The history of the tournament is filled with so many great stories, to name a couple:  Dutch Leonard a retired left-handed pitcher won the first four for the Detroit Tigers

(He played against the great ball players like Ty Cobb, Babe Ruth, and Lou Gerigh)  Then there was Charlie Seaver (he won the tourney 6 times), who played against the greats of the '20's and '30's, going up against Bobby Jones on several occasions (in fact he just missed playing Bobby Jones in the finals of the 1930 U.S. Amateur the last leg of the Grand Slam, Charlie lost his semifinal match on the 36th hole or he would have played Bobby.  With so many of the winners and contestants going on to great golf careers in it makes you wonder what will happen each year.

Many of the local pros have either won the tourney or played to a close finish when their time came up.

Perpetual Trophy: Charlie Seaver retired the first trophy in 1947 when he won it three times in a row.  The second trophy was retired to Russ Valentine in 1953 after he won it three times running.  The present perpetual trophy was donated by The Fresno Bee in 1954 and has been awarded annually  to the best golfer in Fresno each year since then, the nearest it came to being retired were the last two back to back winners Dan Morgan (1958,59) and John Sirman (1961,62).  It is a large bronze cup on a wooden base.  It was updated a few years back and put on a new wooden base with all past winners on the plates on the sides of the base.  Doug Johnson kindly donated the new base in 1998 when he won it for the fourth time.

The overall winner gets the perpetual trophy for the year of his reign as champion.  Other trophies are awarded to the flight winners and then all proceeds are awarded out to the winners and other players that play well.  The other prizes are gift certificates, all in compliance with current U.S.G.A. Amateur rule.  Aside from the Championship Flight, there are men's handicap flights contested at current course handicap, Ladies Handicap and Championship flights, a men's Senior Flight (men age 65 or older), and a men's Masters flight (men 40-54 years old).  The last two flights are played at scratch.  The tournament is played over two weekends /  the Men's Championship Flight is played over the three day Memorial Day weekend and all other flights are played the weekend before.

AS NOTED ABOVE THIS CHAMPIONSHIP HAS BEEN CONTESTED SINCE 1928 WITHOUT A BREAK. 2009 IS THE 82ND RUNNING OF THIS TOURNAMENT!